Anatidaephobia (pronounced anna-tidy-phobia) is a pervasive and irrational fear that you are being watched by a duck. A person with this rare phobia fears that somehow, somewhere a duck is watching their every move. It can become a disabling condition that stops a person from maintaining daily functions and can interfere with the person’s personal and social life as well as compromise their job responsibilities. Anatidaephobia is derived from the Greek word “anatidae” which means ducks, geese or swans and the word “phobos” which means fear. The underlying cause is still unknown but is surmised to be a result of childhood trauma, perhaps having once been attacked by waterfowl.

What are the symptoms of Anatidaephobia?

What are the treatment options available for Anatidaephobia?

There are a number of treatment options available when the phobia becomes so intense that it interferes with a person’s ability to maintain daily functioning:

• Talking to the primary physician, who may then refer the person to a therapist who specializes in phobia treatments
• Traditional ‘talk therapy’ that will help the person identify and control their fear
• Self help techniques
• Hypnotherapy
• Support groups with other people suffering from this phobia
• Cognitive behavioral therapy
• Desensitization therapy
• Exposure therapy
• Relaxation techniques
• Anti-anxiety medications for severe cases 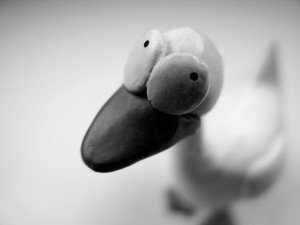 To those suffering from Anatidaephobia, it certainly feels real…no, seriously, nobody is actually afflicted with this phobia. It is not an actual psychiatric diagnosis. It is a fictional, humorous phobia that was first coined by Gary Larson in his popular Far Side cartoons. It became popularized by Tammy Duffey in 2008 when she associated it with the Aflac insurance company duck. The Aflac duck, commonly seen in TV commercials and written advertisements, is always watching you and looking out for you. Tammy Duffey then wrote a tongue-in-cheek article as if the phobia was real with causes, symptoms, how diagnosed and how treated (see above information). It has been regarded as a commentary on the concept that anything can be a phobia. It should be noted here that true phobias are serious and can be debilitating; real phobias should not be taken lightly.

A real phobia is defined as an irrational, paralyzing fear (with emphasis on irrational). An individual suffering from a phobia will have psychological and physical symptoms as described above including anxiety, panic, increased heartbeat, trembling and nausea. It is best treated by a medical or mental health professional.